The Dominican House of Studies traces its mission to the preaching charism and Catholic intellectual heritage bequeathed to the Order of Preachers by its founder, St. Dominic de Guzmán. 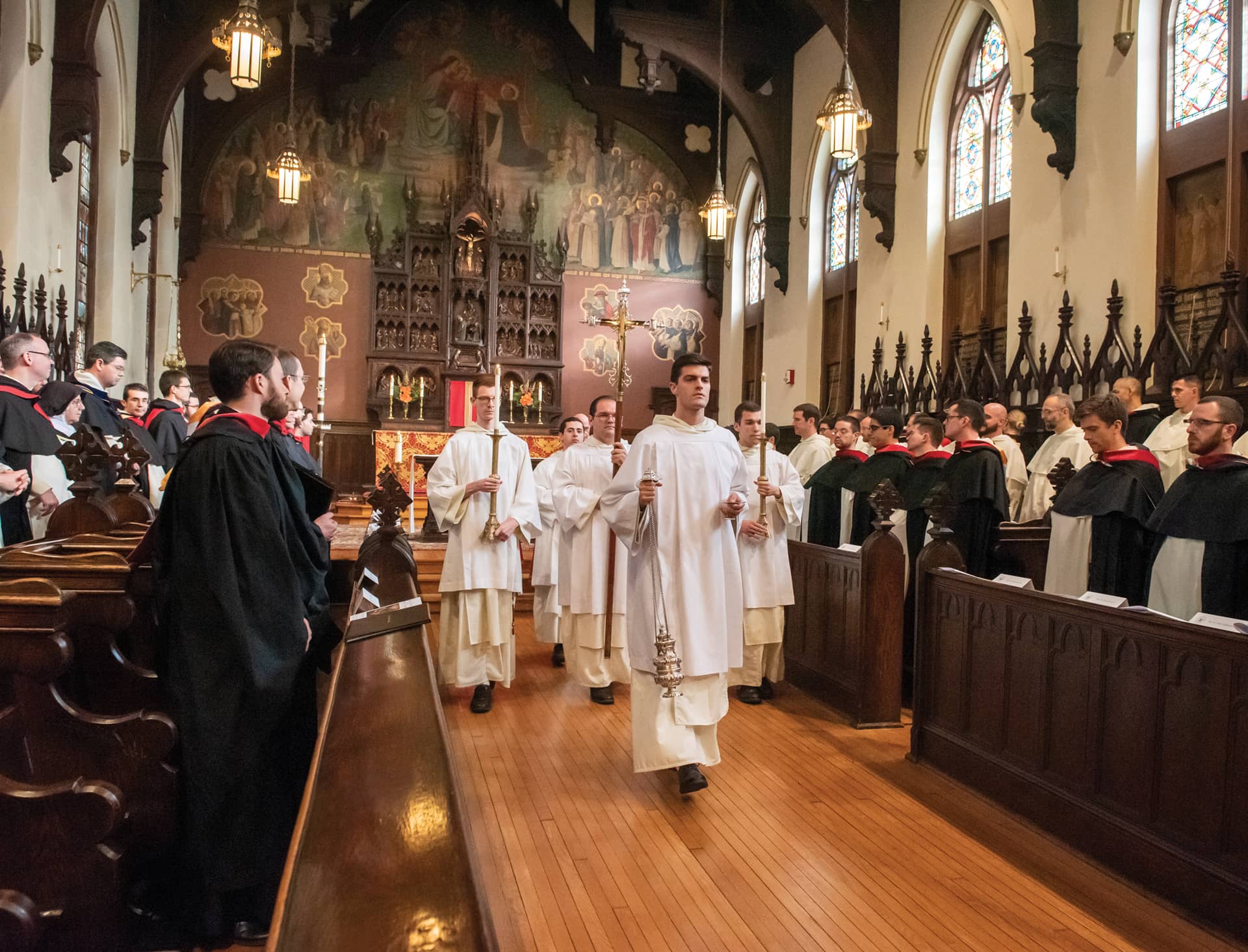 The Dominican House of Studies traces its mission to the preaching charism and Catholic intellectual heritage bequeathed to the Order of Preachers by its founder, St. Dominic de Guzmán. Dominic constructed a religious order international in scope yet decentralized in structure to address the needs of the Church by preparing preachers both intellectually informed and pastorally competent. This evangelizing mission is asserted in the basic claim of the Fundamental Constitution of the Order of Preachers that the Order was instituted “especially for preaching and the salvation of souls.”

The Mission of the Pontifical Faculty

To prepare preachers, Dominic established houses near the leading universities of his time in which students of the Order could follow a prescribed course of study in preparation for their pastoral work. Since Dominic insisted that spiritual formation is essential to intellectual formation, academic study was situated within a religious community shaped by a common life, liturgical prayer, modified monastic observance, a democratic form of government, and fraternal charity. St. Thomas Aquinas completed this vision by sharpening the speculative quest for truth within a broad Aristotelian framework, marked by a respect for the scientific method, freedom of inquiry, broadness of scope, precision of concepts, and largeness of spirit. Thomas remains, even today, a guide and model of the Dominican intellectual life by reason of his docility of mind to Revelation, unwavering respect for the visible world and the human person, and unflagging commitment to think with and within the Church. The Dominican House of Studies is a direct heir to this theological and spiritual tradition that Dominic founded and Thomas developed, a theological heritage both speculatively inclined and pastorally charged that spans eight centuries.

In service to the evangelizing mission of the Dominican Order, the primary purpose of the Dominican House of Studies is to provide a Catholic theological education that prepares students for the ordained ministry in the Province of St. Joseph. Recognizing the wide appeal of a theological education in the Dominican tradition, the Dominican House of Studies accepts all interested and qualified students without regard to race, gender, religion, or ethnic background. The Dominican House of Studies is committed to imparting to all of its students a capacity for serious scholarship and a basic competence in philosophy and theology through the study of St. Thomas Aquinas in dialogue with the best of contemporary thought. For ministry preparation it offers a comprehensive program of studies integrated with spiritual and pastoral components in order to form students imbued with a desire for holiness, capable of effective preaching, and competent pastoral ministry. With an academic environment shaped by a Thomistic focus, a small student enrollment, and a high faculty—student ratio, the Dominican House of Studies fosters among students and faculty an intimacy conducive to personal formation in the spiritual, intellectual, and ministerial spheres of preaching, teaching, and other ministries.

Explore useful links for you to use while you browse our website to learn more about our history, mission, and academic programs. 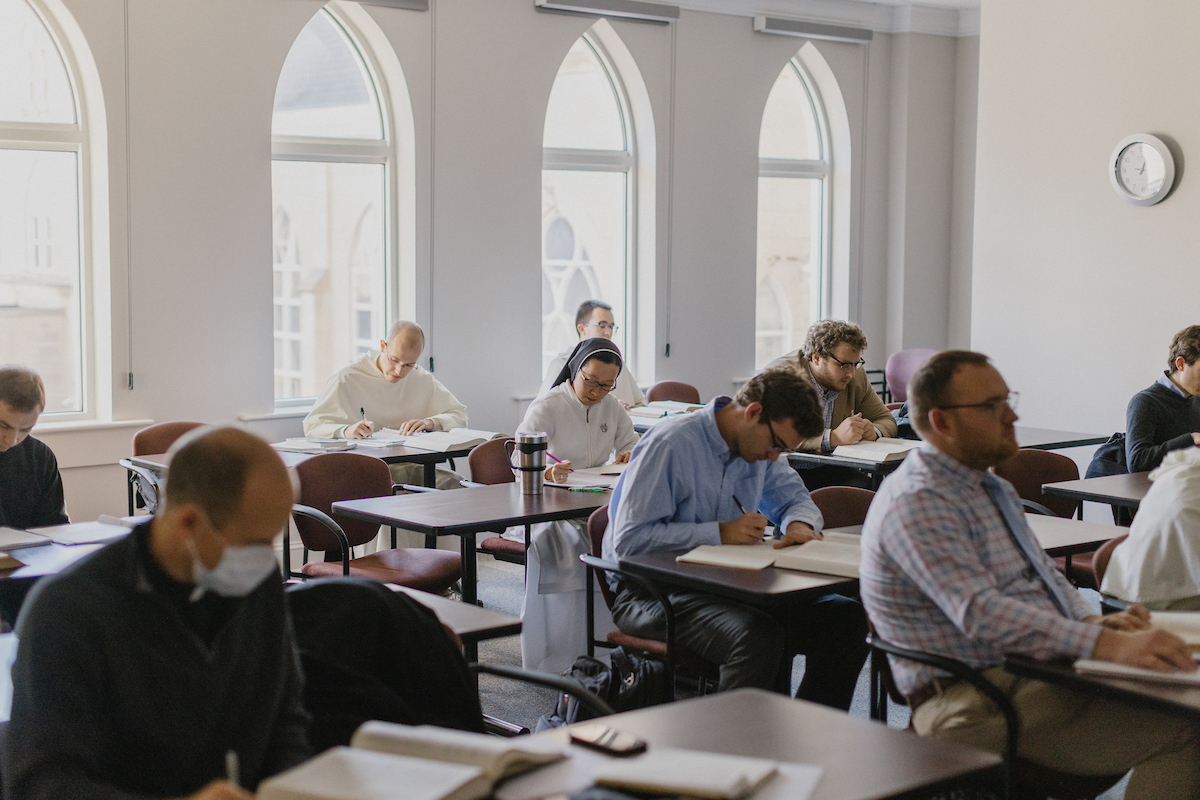 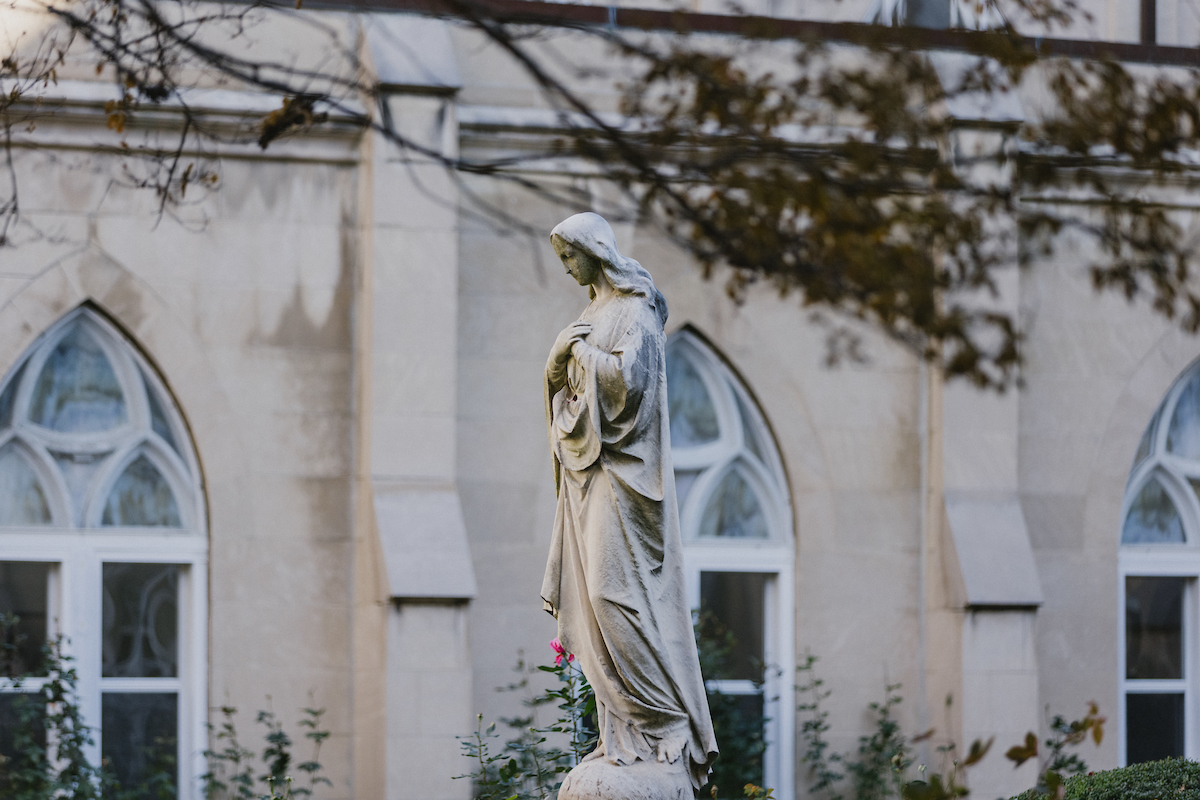 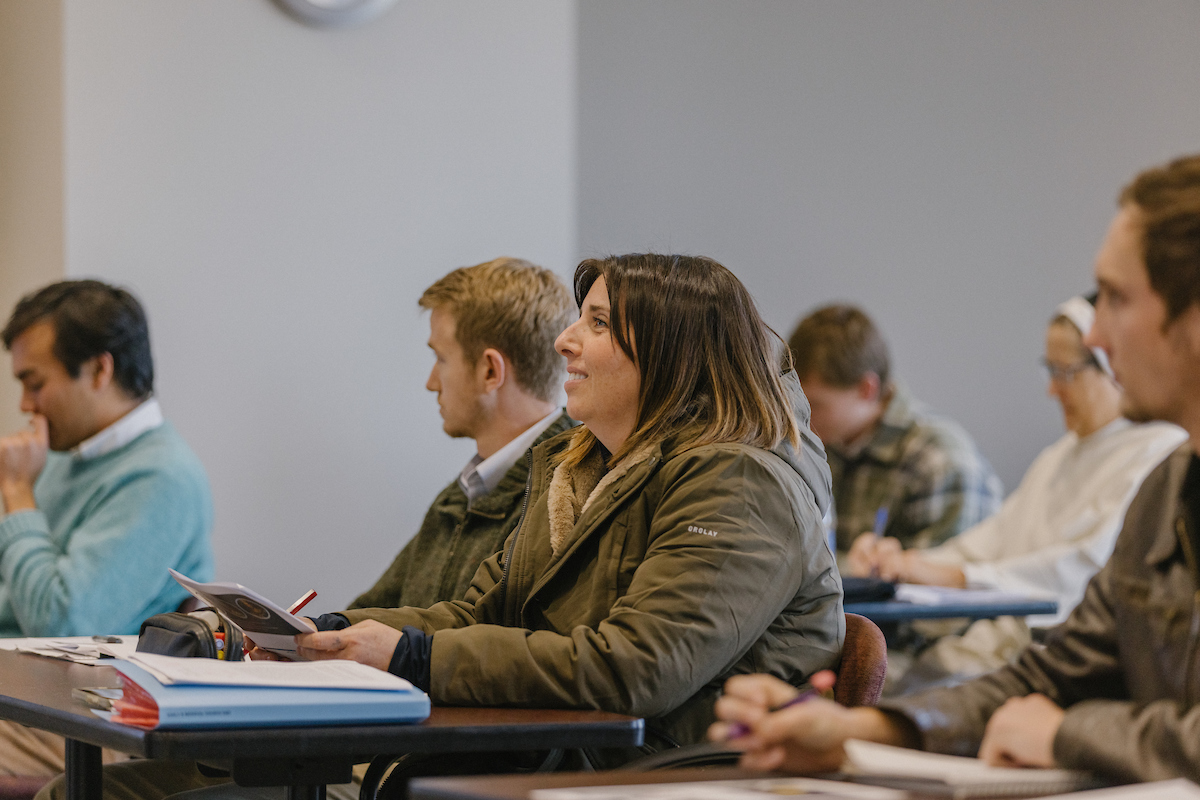 For the Dominican students, the spiritual formation is integrated with the academic and pastoral formation of the PFIC as well as the community life of the Priory.

This integrated formation for the residential Dominican students is a constitutive part of the mission of the institution. Because of the importance of the integration of the academic and spiritual life for all of its students, the PFIC also offers support for the spiritual lives of its nonresidential students, both religious and lay.

Lively interest in theological learning and the intellectual life was bequeathed to the Order of Friars Preachers by its founder, Saint Dominic. Responding to an acute need for well-prepared preachers, Saint Dominic conceived a plan of a mobile band of friars preachers and won the formal approval of Pope Honorius III on December 22, 1216. 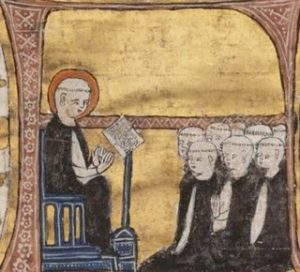 In the first decades of the Order’s life, St. Dominic sent friars to establish houses of study at the universities of Paris and Bologna where they could receive the strong doctrinal training necessary to support their preaching activity. These friars attracted many university professors and students to the Order, among them the brilliant young Thomas Aquinas (who entered the Order in 1244). Aquinas’s achievement crystallized the intellectual thrust of the Dominican apostolate from that time onward.

The Dominican House of Studies is heir to this long-standing tradition of theological excellence and preaching, and is linked to other Dominican centers of study throughout the world. A center for theological studies was established in 1834 in Somerset, Ohio, as the first studium generale of the Dominican Order in the United States. At the end of the nineteenth century, discussions began about moving the studium from Ohio to a location on the East Coast, and the provincial chapter of 1892 ordained that the studium be located in New Haven, Connecticut, near Yale University. In 1902, the new provincial, Fr. Lawrence Kearney, determined that Washington, D.C., would be the site for the institution, now called the Dominican House of Studies, and that, preferably, it would be built near the newly-established Catholic University of America, thus conforming to the historic Dominican practice of establishing studia in major university settings. The groundbreaking for the new building on Bunker Hill Road (now Michigan Avenue) took place on April 23, 1903, with James Cardinal Gibbons of Baltimore, Archbishop Ryan of Philadelphia, and Father Kearney officiating. 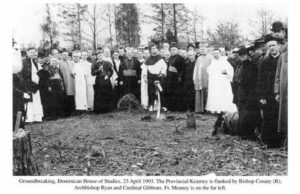 In 1941 the Sacred Congregation of Seminaries and Universities of the Apostolic See designated the Dominican House of Studies an Ecclesiastical Faculty of Theology with authorization to confer ecclesiastical degrees; this was only the second such faculty in the United States (after the Catholic University of America). Presently operating under the provisions of the Apostolic Constitution Veritatis Gaudium (2018), the House of Studies is authorized to grant the degrees Bachelor of Sacred Theology (S.T.B.), Licentiate in Sacred Theology (S.T.L.), and Doctor of Sacred Theology (S.T.D.).

The Dominican House of Studies became a member of the Washington Theological Consortium in 1967, and its students and faculty have been actively involved in this ecumenical work since the Consortium’s inception.

In 1970, the House of Studies joined the theological faculties of the Missionary Oblates of Mary Immaculate (O.M.I.) and the Oblates of Saint Francis de Sales (O.S.F.S.) as part of the Cluster of Independent Theological Schools. At about the same time, and in virtue of its membership in the Cluster, the House of Studies received civil accreditation from the Association of Theological Schools and the Middle States Commission on Higher Education in order to grant the civil degree of Master of Divinity (M.Div.); this accreditation was expanded in 1993 to include granting the civil degree of Master of Arts in Theology (M.A.). With the closing of Oblate College and De Sales Hall in 1996, the Dominican House of Studies expanded its staff and resumed its position as an independent faculty of theology, providing academic and professional training in theology and related disciplines to both Dominicans and non-Dominicans, Catholics and non-Catholics, clergy, seminarians, and laity. The House of Studies marked its centennial year in Washington, D.C., in 2005-2006. 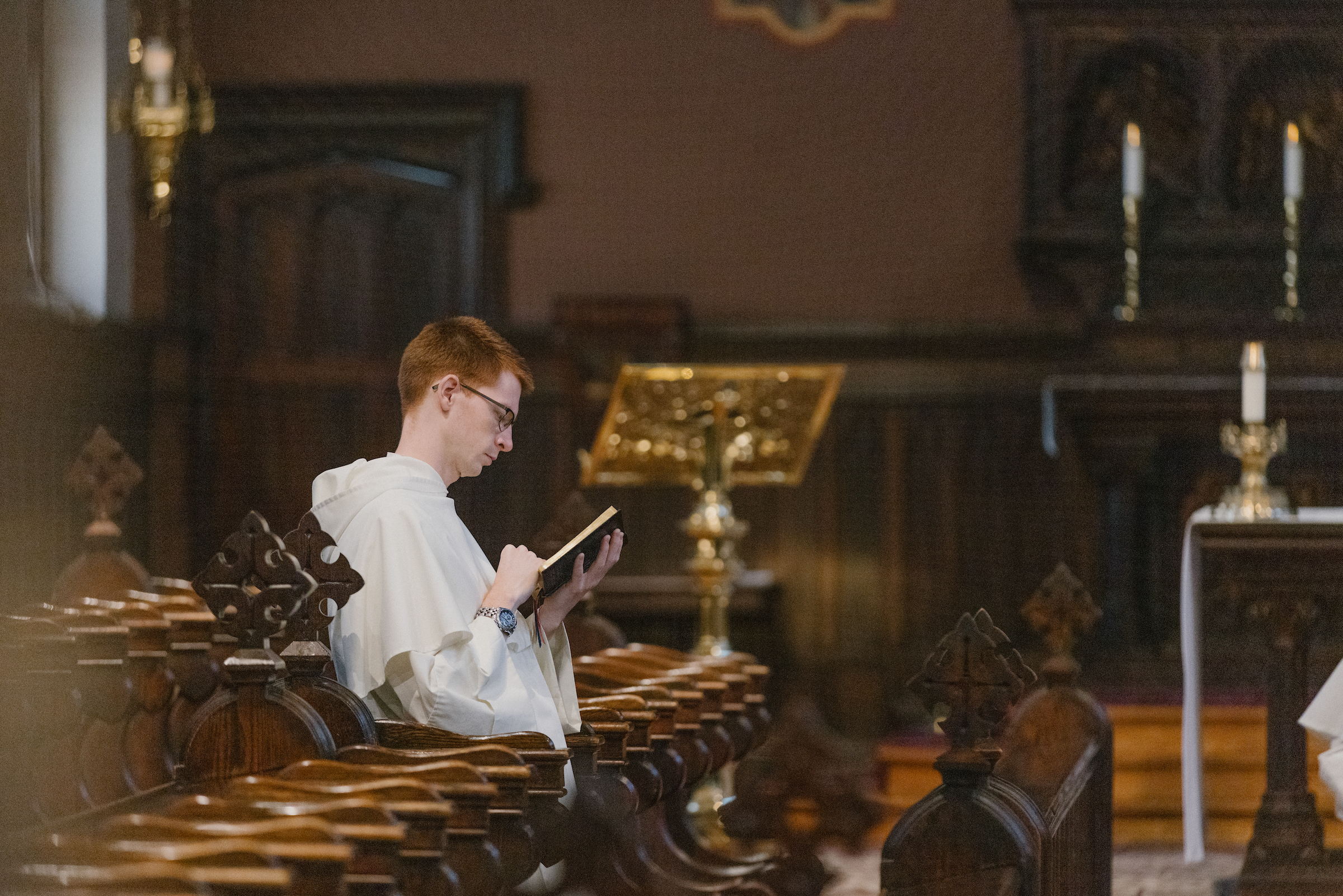 It all starts at the DHS!

Investing in future leaders of the Dominican Order starts with an investment in their studies and formation.