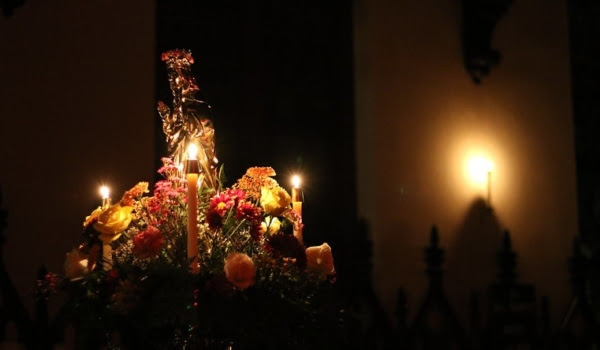 In the early morning before the liturgy, a sacristan makes his way around the chapel. He walks a few feet, stops momentarily, walks a few more feet, and stops momentarily, making his way through the darkness to light the candles throughout the chapel. When he finishes his work, the whole chapel is pervaded by the peaceful glow of candle-fire. Fire is everywhere: fire surrounds the friars’ choir-stalls, fire illuminates Our Lady above the lectern, fire crowns the altars of the Lord that stand throughout the chapel.

Not all chapels have such elaborate arrays of candles; some have only a single sanctuary lamp near the tabernacle. Yet even so, this holy fire strikes the imagination, for fire is a deeply meaningful symbol. The Lord himself chose fire to communicate his presence to his people; the Lord ratifies his covenant with Abraham through symbolic fire (Gen 15:17–18a), he sends his messenger to Moses by the fire of the burning bush (Ex 3:1-6), and his glory appears as a pillar of fire in the presence of the whole people of Israel (Ex 24:17). Fire is such a powerful image of God’s presence that the Lord commanded that a fire burn continuously in his temple, never to be extinguished (Lev 6:5–6), and faithful men and women paid dearly to keep this fire burning (cf. 2 Mac 10:1–3).

The use of fire to show God’s presence becomes obvious when we consider that fire is both of immense benefit to us, and yet, in many ways, beyond our comprehension. Fire sheds light for us to see in darkness; it warms us by sharing some of its own heat with us; and it enables us to perform actions that lie beyond our natural powers—like cooking food or forging metals. Yet the fire that shares its power with us is also beyond our grasp; it is too hot for us to touch, too dangerous to be left unattended. So too, while the Lord turns “darkness into light” (Isa 42:16), he also consumes the rebellious with fire (Num 16:35).

Of course, the Lord is more unlike fire than he is like fire. One evident way in which the image of fire fails in comparison with the Lord is that fire is in no way personal to us. It is a thing; it has not spoken to us or made any promises to us. Yet the Lord has spoken to us, and has made a promise to us—a promise to be with us always, even unto the end of the age (Matt 28:20). The Lord who led his people to freedom by the light of a fiery column (Ex 13:21), the Lord who promised to be a protecting wall of fire around his people (Zech 2:9), the Lord who longed to kindle a fire on the earth (Luke 12:49)—this same Lord promises to be with his people. In each liturgy, the Lord is with his people—surrounding us and burning within us. He is the true fire that enlightens our minds to know him, and inflames our hearts to love him.