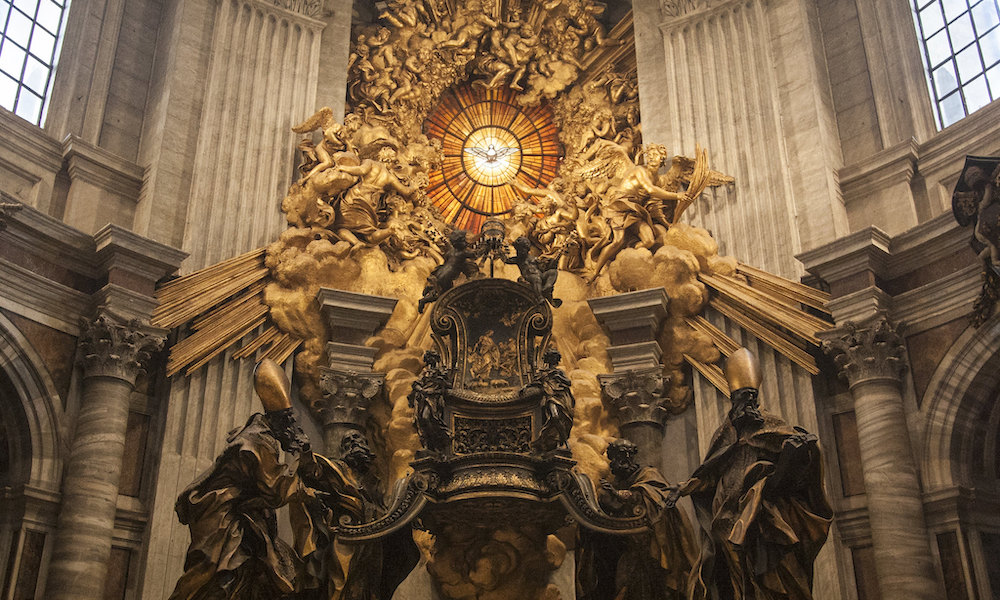 Few experiences are as unexpectedly unnerving—and embarrassing—as settling yourself into a chair only to have it buckle and break, dropping you flailing on the floor. Chairs are supposed to be secure and trustworthy, things that hold us up and protect us. Most chairs will eventually fail; one won’t. Today we celebrate that sturdiest of chairs, the Chair of St. Peter.

While the physical Chair of St. Peter, magnificently encased in bronze by Bernini, has proved surprisingly durable for a sixth-century piece of wooden furniture, the spiritual stability it represents is eternally rock solid. The pope’s teaching authority is a gift Christ gives to the Church which, like a good chair, gives stability and security to our faith.

What prevents the pope’s chair from collapsing, however, is not bronze, but the true rock: “And the rock was Christ” (1 Cor 10:4). Jesus Christ is the true foundation of the Church’s faith, “a stone that has been tested, a precious cornerstone as a sure foundation; whoever puts faith in it will not waver” (Isa 28:16). Peter’s office calls out to us “Come to him, a living stone, rejected by human beings but chosen and precious in the sight of God” (1 Pet 2:4). Peter became a rock of faith because he first came to that living stone.

But Peter wasn’t always so solid or stable. His faith had to be compacted and molded and then reinforced. When Peter stepped out of his boat to join Jesus walking on the water, the waves of disbelief beat down his weak faith. Yet he knew to call out to the one who could steady him, grasp his hand, and set his feet on solid ground (Matt 14:22–33).

Before his Passion, Jesus told Peter “Simon, Simon, behold Satan has demanded to sift all of you like wheat, but I have prayed that your own faith may not fail; and once you have turned back, you must strengthen your brothers” (Luke 22:31–32). When Jesus prayed that Peter’s faith would arise from the ashes of his denial and reinforce the faith of the Church, the Lord assured us he would accomplish it. Jesus promised to make the shifting sands of Peter’s faith into a solid bedrock for the Church.

That promise of Christ holds good for all the popes from Peter to Francis. Their ability to steady the faith of others doesn’t depend on the strength of their own wisdom but on the word of Christ. Even if the chair seems to wobble—as during the Renaissance, for example—the office of the pope has never given way to error about God. We see this exemplified in the life of Peter, the first pope. He could fortify his brothers because he didn’t just follow what he wanted or thought right. Instead, he was open to being led where he did not initially want to go, stretching out his hands to be led by Christ (John 21:15–19). Saved from the waters of doubt and disbelief he can reach out his own hand to strengthen his brothers and secure their faith. Regardless of who is pope, it is Christ who stretches out the pope’s hand to draw us to know and love God.

Dominican priest and theologian Father Antonin Gilbert Sertillanges once wrote, “Towards Rome ever goes the road of the heart and the mind; it can always be traversed; the true faithful traverse it daily.” We go to Peter to find Christ. He leads us to know and believe in him, not as the world thinks of him—“Who do men say that the Son of man is?” (Matt 16:13)—but as he really is. This is why we celebrate Peter’s chair. We don’t have to fear the embarrassment of this chair collapsing beneath the weight of confused ideologies and worldly distortions. When our hearts and minds traverse the way to Rome, they can settle down secure.